This festival finished on Sunday 14 September 2014, and this page is being kept for archival purposes only. 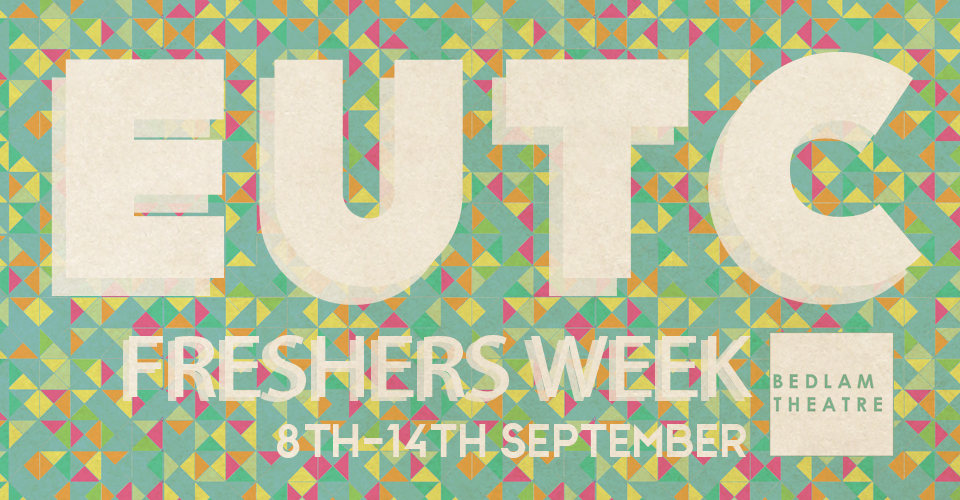 The Edinburgh University Theatre Company kicks off the academic year with a week of shows and workshops!

We have a programme of exciting events going on at our fantastic Bedlam Theatre, showcasing performances from current members, introductory events for new freshers’ and providing refreshments and a chance for people to see what we’re all about. Want to get involved? We’d love to have you.

In Association with PhotoSoc
Monday 08 September

It's a play, honest.
Monday 08 September

It’s a dark time for Bedlam theatre: political corruption has lead to troupe apathy, the enemies of the theatre are becoming ever more active and thuggish mercenaries are employed to corral the masses into performing the ruling classes’ whims. A vile act of deception by none other than the president herself is the last straw for many; but then something levels the playing field. The world is turned on its side, and the lowest and the highest meet somewhere in the middle. Suddenly everyone is on equal footing, and we all have to learn to like one another.

Original writing from EUTC member Rory Kelly, for one performance only.

Mad Captain Hagberd has been waiting for his son to come home for years. Harry is away at sea and the Captain believes that it will only be one day more before he returns. He fashioned a home for Harry and even found him a wife, Bessie, who lives next door with her blind father. Although Bessie knows the Captain is crazy, she is tired of her lifestyle and cannot help but hope that perhaps Harry might indeed return and give a her way out. Could her hope somehow become a reality?

Find out about the Company and see some brilliant Monologues!
Tuesday 09 September

Shakespeare Company Workshop - 5.30pm (Free, 1hr) Come along and discover how you can get involved in one of Edinburgh University’s newest and most exciting theatre societies. Whether you’re acquainted with the bard or not, join in and have a blast. Learn about the company and what it offers the student theatre scene in Edinburgh, chat to committee members and have some fun exploring Shakespeare’s works. Everyone is invited, from novices to experts!

Shakespeare’s Monologues Show - 7pm (£3/2.50 for Members, 1hr) Allow some of Edinburgh University’s resident acting talent to regale you with some of the Bard’s most interesting monologues. From the famed to the obscure, the tragic to the hilarious, there’s bound to be something for everyone!

The Improverts are a long-running improvisational comedy troupe, put on yearly by the Edinburgh University Theatre Company, who primarily perform at Bedlam Theatre.

They perform every Friday night at 10.30pm during Edinburgh University’s term time, and will be putting on two entertaining shows for freshers during Freshers’ Week!

Various improvisation games based on audience suggestions give rise to a hilarious and unique show every time. They also perform yearly at the Edinburgh Fringe and are notable for being, at 26 years, the Edinburgh Fringe’s longest running improvised comedy show.

Titanic 2: Pig in the City