This show finished on Saturday 09 February 2013, and this page is being kept for archival purposes only. 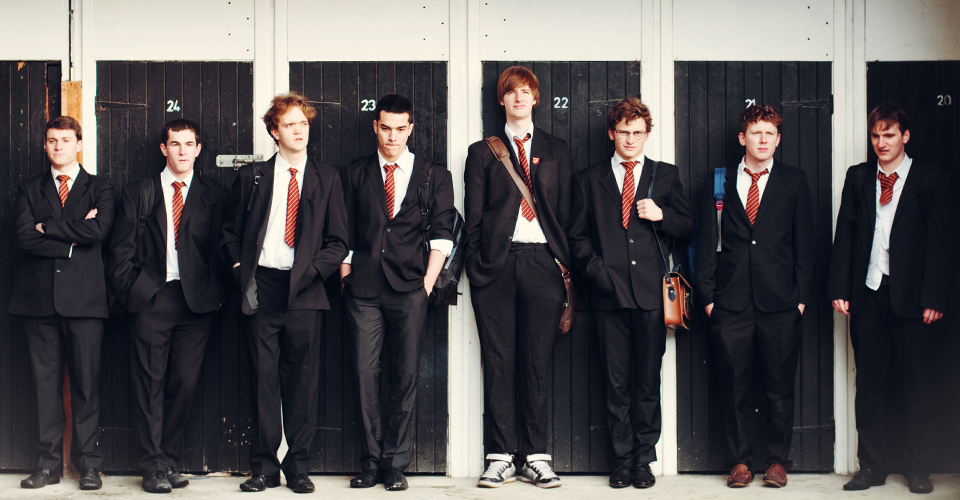 Pass it on, boys. That's the game I wanted you to learn. Take it, feel it and pass it on.

The History Boys is a multi-award winning play by literary genius Alan Bennett. The play follows eight bright young lads on the brink of adulthood, full of hopes and dreams of reaching the heady heights of Oxbridge; a world away from their state grammar school in Sheffield. The boys are eager to learn and their teachers are dedicated to their education but dispute over how, what and even why they should teach them.

Bedlam Theatre never fails to impress. Although lengthy, their production of The History Boys by Alan Bennett was stimulating and performed with a depth and maturity that transcended the playful façade of the story’s setting.

The play is a tale of eight English grammar school boys preparing for entrance examinations into Oxford and Cambridge. While seemingly straightforward, the plot is instilled with themes of prejudice, bigotry and questions of sexual identity.

Wrought with serious undertones, the use of comedy within the play was a key strength. The headmaster of the school (Sacha Timaeus) was a source of constant entertainment as his posh and exaggerated articulation, accompanied by riotous facial expressions, made him almost charmingly condescending. Another refreshingly comical character was Mrs. Dorothy Lintott (Ailis Duff). Duff played the role of disenchanted feminist flawlessly with a sharp wit and the sarcasm of a true academic. Furthermore, the schoolboys were consistently high in energy and often invoked roars of laughter from the audience; actor Jack Kinross (Timms) was particularly amusing as one could not help but chuckle in response to his alarmingly high falsetto whilst he imitated various female personas.

Persuasive character development was yet another significant strong point of the play. Eclectic English teacher Hector (Connor Jones) seemed initially over-rehearsed and lacked the fictitious spontaneity that is so crucial to the genre of theatre. However, as the play progressed Jones became increasingly believable and by the finish I found myself drowning in empathy for the misunderstood schoolteacher. Finally, loveable Jonathan Oldfield (Posner), nonchalant Craig Methven (Scripps), and “James Dean-esque” Jonathan Ip (Dakin) exhibited natural acting abilities that contributed greatly to the overall realism of the storyline.

Considering the extensive duration of the play, directors Sarah McGuinness and Abby Jackson helped to sustain momentum with insertions of clever transition scenes in which the boys danced about to various 80’s tunes while shifting the set. All in all, The History Boys was a thought-provoking and enlightening production that proved an enriching experience for audience members.