This show finished on Wednesday 20 November 2013, and this page is being kept for archival purposes only. 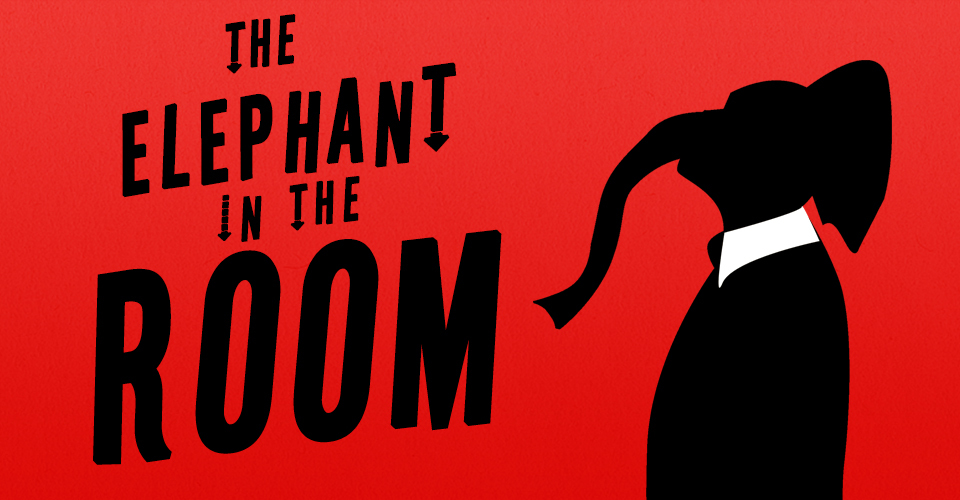 The Elephant in the Room

When Beth, a kindhearted tour guide, finds out that she is terminally ill, a dark-humoured man dressed as an elephant appears in the doctor’s office. He offers Beth a choice: she can go out one door and face the harsh realities of her situation, or she can escape with him through another door and experience a world she’s likely to never forget. What follows, in this hilarious, yet cathartic piece of original writing, is a fantastical adventure featuring off-the-rails coronations, gay imps, giant crêpes, supervillain queens, and wise mystics (who really like biscuits). But as Beth and her elephantine companion begin to form a twisted camaraderie, the characters they meet along the way start to feel strangely familiar…

‘The Elephant in the Room’ is a whimsical and touching exploration of how we all must face up to our problems and live our lives to the fullest - because before you know it, your time is up.

This performance of ‘The Elephant in the Room’ is part of an afternoon triple bill alongside ‘Be My Baby’ and ‘The Lift’. You can purchase tickets for all three shows at a discounted price of £7.00 (£6.00 for EUTC members) via the Bedlam Theatre Box Office.

Brass monkeys ain’t in it. It is seriously cold in Bedlam. I should be seeing Dr. Zhivago or something set in Narnia during the reign of the White Witch. Instead I’m taking my seat for The Lift and The Elephant in the Room, two out of three afternoon entertainments written by Freshers. For such a hit and miss affair there is a great deal on target. The badinage buffet successfully showcased the great things we can expect from Fringe venue 49 in the coming years. Familiar and not so familiar faces breathed life into two daring scripts simply (but effectively) staged.

[…]The Elephant in the Room is a bold, even reckless narrative by Joe Christie. Charging head on at themes relating to the personal calamity of terminal illness approached from a surrealist angle. Beth, a tour guide at the castle (I’m not sure why except that the outfit must have been to hand) is informed that she’s terminally ill. The sardonic stalwart Henry Conklin (having finally escaped from The Lift) appears to her dressed as an elephant. The effect of the costume on Conklin conjures imaginings of a live action version of the YouTube classic The Wanky Shit Demon. The Elephant offers Beth (nuancedly, understatedly played by Sophie Harris) a choice to either face the realities of her situation or to journey through a shifting dreamscape landscaped by her own mind. A lot is packed into the script including off-the-rails coronations, gay imps, giant crêpes, supervillain queens, and wise mystics.

There are echo’s of the acclaimed Something There That’s Missing, the surprise hit of last Fringe. Elephant in the Room is equally creative, equally absurdist and a vehicle for equally quirky as well as engaging performances. It’s unlucky in the line-up though, following on from the unashamedly boisterous The Lift. I never could like Moulin Rouge after it was shown on a transatlantic flight immediately after my first encounter with Shrek.

Both Elephant in the Room and The Lift made me sorry not to have seen the full cycle – word in the bar was that Amanda Whittington’s Be My Baby was rather good. Both the plays I saw excite a sense that Bedlam is steaming through the waters it knows best – supporting emerging talent on stage and off. The current generations are heirs to a noble tradition. Their commitment to their craft does them credit, honouring that most venerable and lively of Edinburgh theatrical institutions.

The annual Triple Bill event put on by Edinburgh University Theatre Company at the Bedlam Theatre is a series of three plays less than an hour long that are produced by newcomers to the company, scouting the potential that is yet to be discovered. While cynics might presume that the amateur productions will be less than spectacular, they were corrected by the fresh talent that graces the stage this year.

[…]Finally the series concludes on a melancholic note with The Elephant in the Room, written and directed by Joe Christie. We watch Beth’s world collapse with the news that she is terminally ill, albeit with a comedic twist as an elephant waits outside the door. This “fucked-up fairy godmother” as described by Christie, gives her the choice of facing reality, or to escape it with an adventure into a fantastical world. While some of the characters in this play seem quite unbelievable at times, this does help add a certain mystic quality of Beth’s imaginary world as she encounters some people that are all too familiar. The play is a wonderful examination of the psychology of the human mind as we learn that we cannot outrun our fate.

With two weeks to formulate the scripts and three weeks for production, the Triple Bill is wondrous in the sense that so much creative entertainment can be produced in so short a time. It is simply a shame that all the effort culminates in only a single screening of each play.